Almost 4 out of 5 parents are confident of their ability to teach their own children about sex and sexuality issues, and 2/3’rds believe that parents should be dictating any school-based teaching, not the government or groups such as Family Planning and Rainbow Youth.

In the independent poll of 846 people undertaken by Curia Market Research, 78% said that they would be confident teaching their children about sex and sexuality issues. Confidence was higher amongst National and NZ First supporters than Labour / Green supporters.

62% believe that parents, not the Government, should have the final say on what sex education is provided in schools – with parents of children under 18 stronger on this view than adults without young children (68% v 59%). Once again, National and NZ First supporters backed the role of parents (65% and 63% respectively) but support for the government rather than parents dictating the curriculum was higher amongst Green voters.

“This polling is a clear rebuke to the current government approach of using groups such as Family Planning and Rainbow Youth to develop curriculum with minimal input from parents. In fact, the clear message is to resource and empower parents to educate their own children. Parents have been horrified at groups coming in to schools and undermining the role and values of parents with sex education resources targeted at children as young as five which fail to take into account the emotional and physical development of each child and the values of the family,” says Bob McCoskrie, National Director of Family First NZ.

“The government is currently pursuing and promoting a curriculum where children are indoctrinated on ‘gender identity’ ideology and the harms of gender stereotypes, and given dangerous messages that they’re sexual from birth, that the proper time for sexual activity is when they feel ready, and that they have rights to pleasure, birth control, and abortion. Most schools, along with parents in that school community, are rejecting the extreme elements of the new sexuality education guidelines released at the end of 2015.”

“Parents know their children the best and should determine the best timing and most appropriate way to tackle topics such as keeping themselves safe and ‘where do babies come from.” A valueless ‘one size fits all’ approach is far too simplistic and can even be harmful,” says Mr McCoskrie.

“Studies show that the biggest protective factors for coping with puberty and sexual involvement are married parents, family values, parental supervision, and parental expectations for behaviour. What happens at home is the greatest determinant of the outcomes for the young person.” 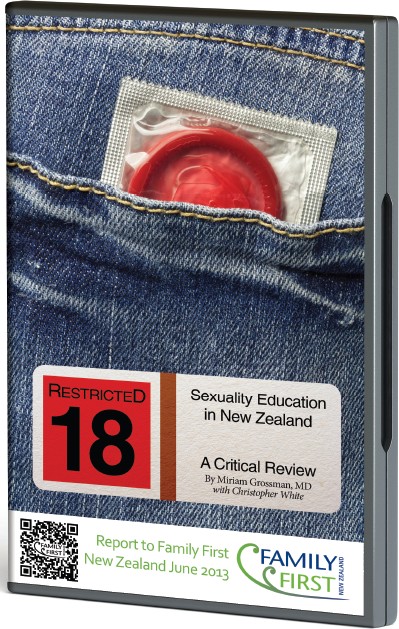 Family First released a report in 2013 “R18: Sexuality Education in New Zealand – A Critical Review” by US psychiatrist Dr Miriam Grossman which was sent to all school principals and all Board of Trustee Chairpersons of Intermediate and Secondary schools in NZ. Dr Grossman warned that the sex education resources fail to tell the full facts and compromise the concerns and wishes of parents, and the safety of young people. “A premise of modern sex education is that young people have the right to make their own decisions about sexual activity, and no judging is allowed. Risky behaviours are normalised and even celebrated. Children and adolescents are introduced to sexual activities their parents would prefer they not even know about, let alone practice. It’s reasonable to ask: is the ‘comprehensive sexuality education’ foisted on young people all over the world about sexual health, or sexual licence?” says Dr Grossman.

“There seems to be a basic and ironic assumption that parents know nothing about sex and that only Family Planning and Rainbow Youth do. This is a myth and is rejected by Kiwi parents – as evidenced clearly from this poll,” says Mr McCoskrie.