With the shock announcement of Prime Minister John Key, the focus is now on who will be our new Prime Minister next week. And where do they stand on key family issues.

We will be inviting the newly appointed PM and leader of the National Party to our Forum on the Family next year to find out more about their family values (along with the other major party leaders) – but below is a brief summary of the potential candidates for both PM and Deputy PM, how they’ve voted since 2002 on some key (and contentious) family issues. 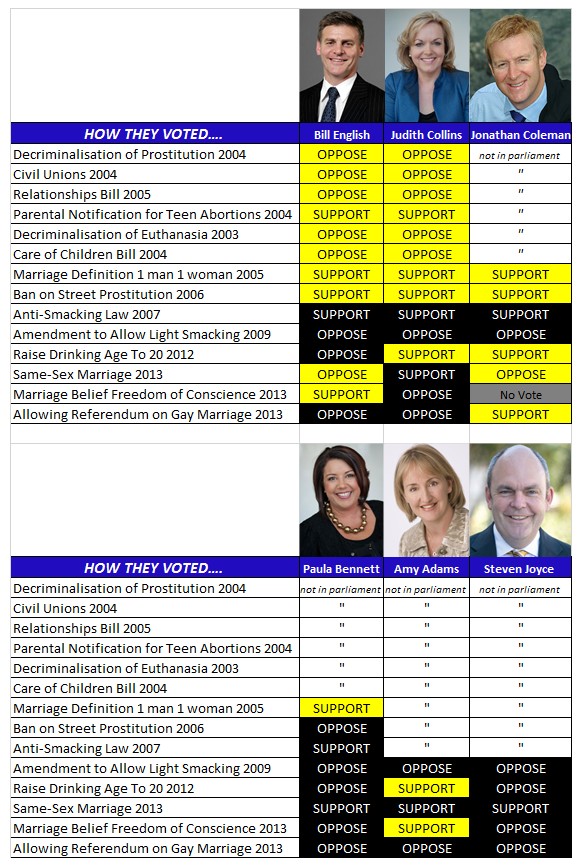 We’ve picked some of the key family issues but there are many more that you may be interested in. You can see their full voting record by clicking on their name

For a full explanation of the laws voted on, DOWNLOAD our VALUE YOUR VOTE 2014 pamphlet which details them all.

There have also been other votes on key family and moral issues – including Easter trading, SkyCity pokie deal, regulation of loan sharks, paid parental leave, banning street prostitution nationwide, and others. On some of these issues (including the anti-smacking law, and the sensible bill to amend the anti-smacking law), these traditional conscience votes have been ‘whipped’ based on John Key’s or the party’s ‘conscience’. The rejection of the anti-smacking law referendum in 2009 also was based on John Key’s view – rather than the people’s. This has been disappointing. It is hoped that the new leader will not be so heavy-handed on conscience issues and will respect citizens’ initiated referendums.

As you can quickly see from our analysis, there are some candidates for the next Prime Minister who we would argue are more ‘family-friendly’ than the other candidates – in our view. Let’s hope that the National caucus agrees!

Our Value Your Vote resource will be updated ready to go for the General Election next year. Stay tuned!