Duncan Garner’s and Ian Hassall’s columns regarding the anti-smacking law have both got the wrong end of the stick – pun intended. The test of the effectiveness of a law is its ability to curtail the behaviour that society deems unacceptable, without penalising responsible citizens. On both counts, the law has failed.

When 6-year-old Coral Burrows was killed by her stepfather Steven Williams in 2003, then-Prime Minister Helen Clark said that we needed to amend s59 to address the “high level of child violence and neglect.” Green MP Sue Bradford jumped on the ideological bandwagon and introduced what she called in her media release, an ‘anti-smacking bill’.

The proposal to ban smacking was motivated by a commendable desire to reduce child abuse – a desire we all share. But kiwi parents rejected the law because they knew it would have no effect on child abuse rates, and would criminalise good parents raising great kids. After being pushed through by politicians (including National MP’s who had campaigned against the law), the anti-smacking ideology received a well-deserved spanking in the Referendum – a resounding 87% saying no to the law.

So has the law achieved the goal used to justify its introduction?

The continued ‘roll of shame’ of child abuse deaths over the past three months in the media and significant increases in serious child assault offences reported by Police – 83% increase between 2008 and 2013 – demonstrates that the anti-smacking law has been a spectacular failure. (Recorded sexual offences against children rose 43% and child neglect rose by 42% during this same period, and notifications to CYF rose by a whopping 66%.)

The problem is not getting any better – in fact it’s getting worse, much worse. The public were right.

On the other hand, the ban has targeted good parents, and has wasted valuable time and resources of the police and social agencies.

The most recent review of police activity also shows disturbing trends, and reveals that almost 600 kiwi families have had a police investigation for allegations of smacking or minor acts of physical discipline since the anti-smacking law was passed yet only 9% of them have been serious enough to warrant charges being laid. The report also referred to an increase in false allegations of assault. This may come from neighbours or even the children themselves. Forty-six prosecutions have been brought for ‘minor acts of discipline’ – another eight prosecutions were brought for ‘smacking’ on the buttocks or legs. None of the smacking charges involved ‘smacking children around the head or face’ as Garner incorrectly claims. Garner also fails to mention that the monitoring has stopped since the end of 2012. 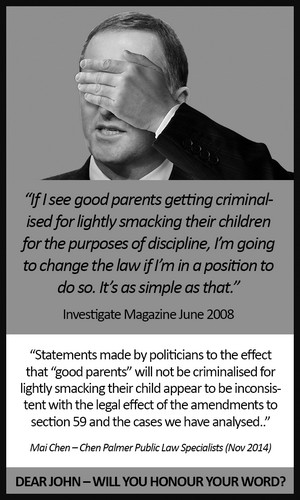 Garner and Hassall – and the politicians – also conveniently ignore the real concerns raised last November by leading public lawyer Mai Chen in an analysis of the law, who said that “statements made by politicians to the effect that the new Section 59 does not criminalise ‘good parents’ for lightly smacking their children are inconsistent with the legal effect of Section 59” and “As a result, non-lawyers, including parents and the police, will have difficulty applying Section 59 in practice. Parents will struggle to know whether their actions constitute an offence under Section 59 or not, and in cases of doubt, police will prosecute and leave it up to the Court to determine.”

Of course fewer parents may consider using smacking. They don’t want to break the law. But they’re not the type of parents we should be targeting.

The law is held in contempt by New Zealanders. A recent survey of 1,000 NZ’ers found that only 12% of respondents think the law change has had any effect on the rate of child abuse. The survey also found that two out of three respondents said they would flout the law and smack their child to correct their behaviour if they thought it was reasonable to do so. Mothers and younger parents were more likely to have smacked.

Let’s be quite clear. Child abuse is unacceptable. We must take pro-active action and tackle head-on the difficult issues of family breakdown, non-biological adults living in the home, drug and alcohol abuse, violence in our media, mental illness, and other key factors identified by the various UNICEF, child agencies, and Children’s Commissioner’s reports. Banning smacking will not stop child abuse, as has been evidenced in NZ.

Parents have been stripped of a parenting technique which, when used appropriately, has been proven to be effective and appropriate.

We definitely need to send a strong message that violence and child abuse is unacceptable. But in our attempts to send a clear message, we should not end up treating good parents as criminals under the law.

The current law runs counter to scientific evidence, previous experiences with similar bans, and the wisdom of previous generations.
http://www.stuff.co.nz/dominion-post/comment/70480975/Opinion-Anti-smacking-law-still-fails-children