A campaign has been launched by a mother who is seeking changes to the parental notification law when a teenage daughter becomes pregnant. A petition was presented to Parliament last week by National MP Chester Borrows on behalf of Stratford mother Hillary Kieft whose 15 y/o daughter attempted suicide after a secret abortion organised by the local school and community health nurse. The Community Health Nurse told mum that her daughter had just been at a ‘counselling session’ when in fact she was having an abortion!

READ MORE about the Campaign www.hillaryslaw.org.nz

WHAT DO NZ’ERS THINK?
A 2010 independent poll of 1,000 people by Curia Market Research found that four out of five people supported parental notification laws. In a similar independent poll in 2012, teens (aged 15-21) were asked “Provided it won’t put the girl in physical danger, should parents be told if their school-age daughter is pregnant and considering getting an abortion?” almost 2 out of 3 young respondents thought the parents should be told. 34% disagreed.

HOW MANY YOUNG PEOPLE AND FAMILIES HAVE BEEN AFFECTED? 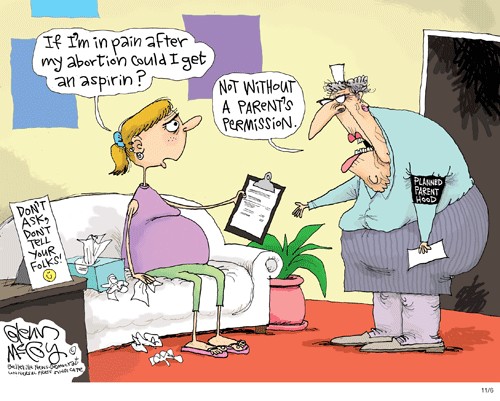 A stunning admission has been made by Family Planning Association that up to 1,000 young teenage girls have been taken for an abortion without their parents knowledge since 2004, when a change to the law was rejected by Parliament. The admission was made by the Family Planning Chief Executive Jackie Edmond in an interview with Paul Henry last week. She cited a study that suggested that around 25% of schoolgirls who have had an abortion in New Zealand don’t tell their parents they have had one.

Abortion figures from Statistics NZ show that from 2004 – 2013, 799 abortions were performed on 11-14 year olds, and a further 34,000-plus on older teenagers. Focusing on just the younger teens (aged 11-15), that would mean that up to 1,000 families with very young teenage daughters have been affected by this law in that short period of time, based on Family Planning’s estimates.

WHAT ABOUT THE DIFFICULT CASES OF ABUSE AND INCEST
We are certainly concerned about those isolated cases. The proposed law change allows for exceptions. If there is concern about the wellbeing or safety of the young girl, then an application can be made to the Family Court. But Hillary’s daughter was loved and she knew she was loved. She was bullied into a response by the school and health nurse. And Hillary’s case is not the only one we’ve heard of where loving parents and loving families have been affected.

Watch coverage of this issue on TVNZ’s Seven Sharp

HOW CAN YOU HELP?
Do you know of any families that have

been directly affected by this law? If so, please ask them to contact us in complete confidence.

We will keep you informed on this important family campaign.