Wall Street Journal 8 April 2014
After decades of decline, the share of mothers who stay home with their children has steadily risen over the last several years, a new report has found.

In 2012, 29% of all mothers with children under age 18 stayed at home, a figure that has steadily risen since 1999 when 23% of mothers were stay-at-home, the Pew Research Center reported Tuesday. The share of stay-at-home moms had been dropping since 1967, when about half of all moms stayed home. 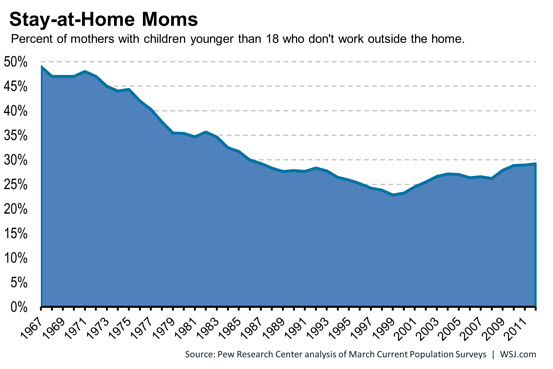 The report also found a drop in women working because of the recession, a trend that has lingered as the economy recovers. Pew cited an increase in immigrant families, for whom it is more common to have a mother stay at home with her children, and an increase in the number of women who said they were disabled and unable to work.